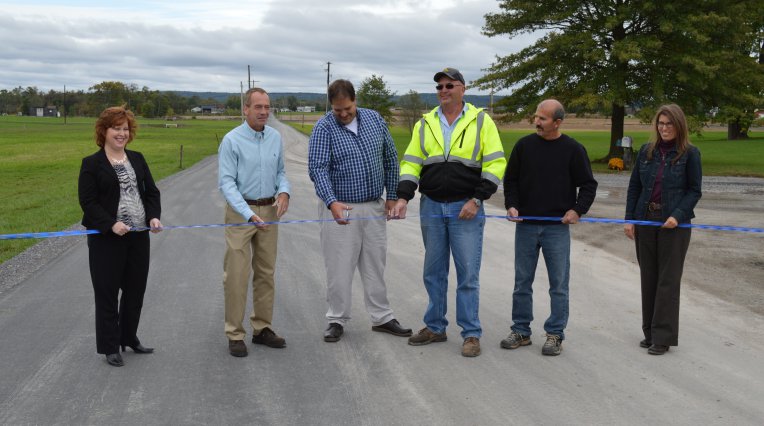 On Thursday October 1st , Brent Risser of Risser Grain cut a ribbon stretched across a newly paved section of Beaver Run Road which leads into Risser’s Turbotville location. The transportation project was jointly funded by local and state government along with private dollars.  In attendance for the celebratory event were Senator John Gordner, who was instrumental in the initiation of the project, Representative Lynda Schlegel-Culver, and the Northumberland County Commissioners.  Neighbors and well-wishers from the agricultural industry also participated in the festivities.

Senator Gordner stated, “This is an outstanding example of a government and business partnership that will create access to markets and create new jobs.  I’m always pleased to be able to assist in such projects.”

Representative Lynda Schlegel-Culver added, “You can’t get any bigger win to improve the economy, agriculture, and community while creating jobs.”

Risser told those in attendance that his Turbotville location would not only benefit producers in the immediate location but would also now serve farmers from far reaching areas further emphasizing the positive influence of the project.  He stated, “The road is also essential in supporting the Pennsylvania farmer.  The reconstruction of Beaver Run Road will create an efficient flow of commodities and help sustain Pennsylvania agriculture.”

Risser is especially grateful for the cooperative effort and added, “I want to thank Senator Gordner, Phil Dun, Representative Lynda Schlegel-Culver, the County Commissioners and everyone at Lewis Township for realizing the importance of rural infrastructure and supporting Pennsylvania agriculture by funding this project.”